I found some screenshots I took of Final Fantasy XIV: A Realm Reborn that I took in the first month of 2.0’s release, back in 2013. I thought it would be nice to compare the look of the game then and now.

END_OF_DOCUMENT_TOKEN_TO_BE_REPLACED

I have played two games in the past month that I could safely say are among the greatest games I’ve played ever. The first, The Legend of Zelda: Breath of the Wild, artfully advances the mechanics of open world adventure games, and the interactions of those mechanics, in a way that future games should aspire to emulate. It is a game where the act of playing the game brings immense joy and delightful surprise. The second, by contrast, is a game that I think is amazing in how it conveys a story through its mechanics and through the inherent structure of a video game. The story of Nier: Automata could not be told through any other medium, not without losing much of the impact and connection I felt playing this game. To put the cart before the horse, I think that if you have any investment in video games, either as your primary means of entertainment or as the premier form of interactive fiction, you owe it to yourself to play through Nier: Automata.

END_OF_DOCUMENT_TOKEN_TO_BE_REPLACED

Virtual Reality is now… a reality! Apart from issues shipping the things out to their anxiously awaiting fans, the Oculus Rift CV1 and the HTC Vive are now in the hands of consumers ready to experience the closest thing we have to the Matrix. Or Sword Art Online. I am one of those fans, having been in possession of a HTC Vive for a few weeks now and can give my thoughts on preparing for VR and using VR. Prior to getting the Vive I was upgrading my PC, not only in preparation for the Vive but also to play games at higher settings with smoother frame rates.

END_OF_DOCUMENT_TOKEN_TO_BE_REPLACED

I am in the market for a PlayStation 4. With the upcoming release of Persona 5, Gravity Rush 2, Final Fantasy XV and The Last Guardian, there is finally a number of games that are not available on the PC that I would like to play. So it is quite fortuitous that Sony announced two new models of the PlayStation 4, the Slim and the Pro. The Slim is the unsurprising smaller and more efficient second rendition of the base PS4, while the Pro represents a new change in the console hardware lifecycle that was previously only seen in Nintendo’s handhelds, namely the New 3DS. The PS4 Pro promises greater graphical power, allowing it to support output to 4K televisions, but also to improve graphical quality and/or framerate at 1080p. The Sony conference also spoke at length about support for HDR-capable televisions, but through firmware updates every PS4 model will support HDR.

If you have a 4K television, it would be an easy decision to upgrade to the Pro (though for some inexplicable reason the PS4 Pro does not support Ultra 4K Blurays, the Xbox One S does though). So for the rest of us, the decision is whether to get the Slim (or stay with the base model), or get/upgrade to the Pro. (As a side note, if you already have a base model PS4, the only reason to upgrade to the Slim is the addition of support for 5GHz wifi and the ac wifi standard.) Here I’ll give a brief overview of the changes the Pro brings over the base/Slim models and some of the other stuff talked about in relation to the Pro.

END_OF_DOCUMENT_TOKEN_TO_BE_REPLACED

I am very, very impressed with the current state of Star Citizen. Having voiced and animated characters in missions is a huge step in making the multiplayer part of the game much more interesting and immersive. Plus, what they’re pulling off with their modified Crytek engine looks unbelievable. I know I should temper my expectations, but I am really excited for its eventual release in two years or more.

It’s fair to say that No Man’s Sky has been a hot topic recently, with a very popular release accompanied by a vocal outcry over perceived and actual omissions and shortcomings of the game. Having played No Man’s Sky for a couple of hours now I think I have a good sense of what the game is and where it’s going, both in terms of the game itself and the planned updates that will add features like base building. Put briefly, I feel that No Man’s Sky is an excellent podcast game – like Minecraft, a game I can just spend hours in while listening to podcasts at my leisure.

END_OF_DOCUMENT_TOKEN_TO_BE_REPLACED

They are really changing things up for Sun and Moon. Ice Ninetails and Sandshrew, trials with Pokemon as the final battle instead of trainers, and lots of multiform Pokemon.

So I’ve now finished Metal Gear Solid V and it was a pretty good game. Not better than The Witcher 3 for me, mainly because MGSV is flawed in its sparseness of story in the first half and a few other quibbles about its open world design. The rest of my thoughts on the game will be after the cut, but as a warning there will be major spoilers after the cut.

END_OF_DOCUMENT_TOKEN_TO_BE_REPLACED

I am not a graphics programmer. I have only passing knowledge of the graphics pipeline and could not code a shader to save my life. But as a gamer I am fascinated by the research behind anti-aliasing techniques, and so it was with great interest I read on Neogaf about the new AA technique being used in Farcry 4, Hybrid Reconstruction Anti-Aliasing, presented at SIGGRAPH 2014. Of particular note is that this technique performs a little better on AMD’s latest graphics architecture, GCN, which is present in both current generation consoles. It suggests that, given the console focused development of most AAA game studios (and game engine studios), the next few years could see more research into graphical techniques optimised or more performant on the GCN architecture, and thus influence the direction of high-end graphics performance on the PC.

END_OF_DOCUMENT_TOKEN_TO_BE_REPLACED

I’ve just installed a second monitor for my PC, the QNIX QX2710 LED Evolution II SE. This 2560×1440 monitor is one of those famous Korean monitors that offer a high-resolution IPS (or more accurately Samsung PLS, which is essentially the same thing) monitor for a relatively cheap price. The downside is that the panels are A- panels, so they’re defective enough to be rejected from a big brand monitor, but those defects are not major. For example, it may have up to 6 dead pixels. Luckily mine has no dead pixels, though it does have backlight bleed. 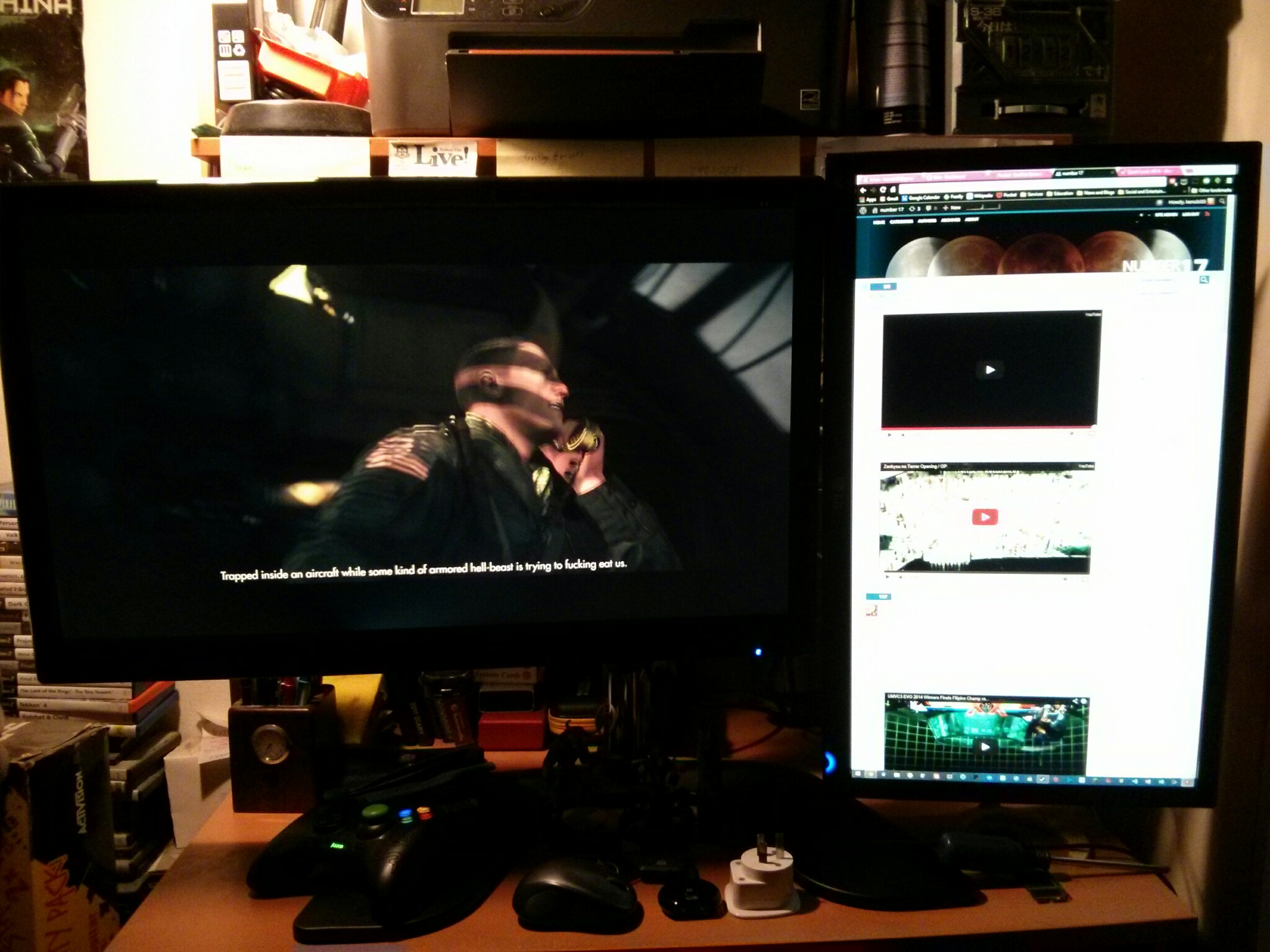 The other feature of these monitors that attracts PC gamers is that the refresh rate can potentially be overclocked up to 120Hz, with most getting at least 96Hz. This roughly means you can play games at framerates higher than 60 fps with no tearing (up to the refresh rate of the monitor). My monitor can get up to 110Hz without issue, it seems (though my frame-skipping analysis was quite rushed). With Wolfenstein and Bioshock Infinite I can play with V-sync off and get no screen tearing (which was a noticeable problem on my old monitor with V-sync off). The issue is that to achieve those refresh rates with AMD graphics cards you need to use a third-party patch for the AMD graphics drivers, and that patch disables hardware accelerated video and HDCP (necessary if you want to watch Blurays on your PC).

But otherwise it’s a fine monitor for the price I paid for it, $345 including shipping from South Korea (the price has since gone up). I purchased from AccessoriesWhole on eBay, but I hear that Dream-Seller and Greensum are also good sellers to buy from.