The last two episodes have toned down the serious story elements, perhaps to compensate for the serious episode six. So the comedy levels have been increased dramatically, and a new girl joins the cast.

But firstly is the weekly highlight of Kore wa Zombie desu ka?, and that is the voices for Eucliwood. Episode seven gave us Yuki Matsuoka, voice of Osaka and Tsuruya, and thus bringing the number of Azumanga Daioh seiyuu voicing Yuu to two (Tomoko Kaneda voiced in episode 2).

Ayumu has his tests to do. After a lengthy explanation of string theory and quantum physics from Haruna, Ayumu is no better prepared for his maths exam. Yuu tries to help at one point, but Haruna writes over her notes in anger. 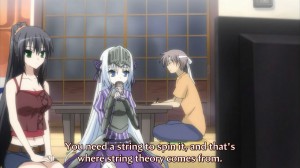 Luckily Haruna, despite her incomprehensible method of solving maths equations, is able to predict accurately the questions on the exam, allowing Ayumu to get through it fairly easily. 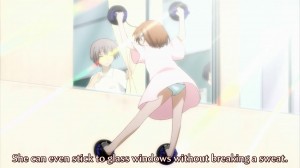 With that out of the way, Haruna calls Ayumu to a location where a new megalo has appeared, though she doesn’t actually tell him where. Luckily Seraphim calls Ayumu to relay the location and tells him to hurry.

Ayumu arrives to try and help, but is surprised by an army of jellyfish (voiced by the ever comical Satomi Arai), who after feeling him up and realising their mistake immobilise him instead. They spot Haruna and move in to feel up her instead.

Luckily a mysterious ninja arrives to banish the megalo with… tonkotsu ramen. She turns out to be Maelstrom, a vampire ninja from a rival clan of Seraphim’s. 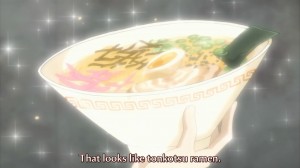 After the battle Aikawa attempts to help Maelstrom after Seraphim twists her arm, only to have a jealous Haruna knock them down… causing Aikawa and Mael to fall on each other and accidentally kiss.

Haruna storms off, leaving Aikawa and Seraphim to tour Mael’s tonkotsu ramen facility, where they plan to rain tonkotsu soup over the city to banish all the megalo. Aikawa enjoys some of the ramen, while Mael acts very tsundere, establishing her position as rival to Haruna. 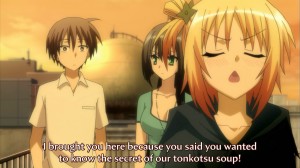 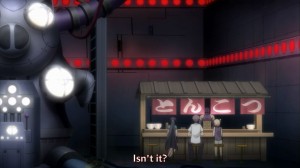 On their way home, Sera reveals that kissing a vampire ninja is actually all that is required to get married, meaning Aikawa is married to Mael. Then everyone enjoys Tanabata, or at least Haruna’s version of Tanabata.

The next day Dai-sensei, Haruna’s teacher, delivers a package to Aikawa… a pair of glasses. However he is interrupted by the appearance of Mael, aka Yuki, who presents him with a packed lunch and declares she’ll try to be a good wife to Aikawa. 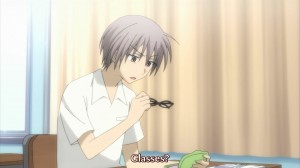 Finally, Aikawa has the glasses put on him, revealing that they are in fact x-ray glasses. 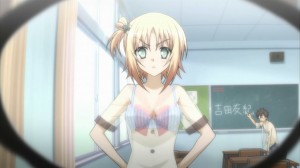 This was another funny and great episode, but there was something that defined this episode.

Frankly, if you don’t have Hisaka Youko going nyan in your anime, you are wasting her voice. Poor Aikawa, greeted with such a sight only to have Sera pierce his eyes. 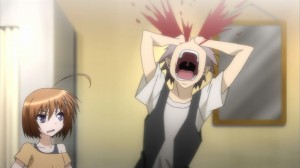 Plot wise, nothing much happened. The first half was mostly about Yuki learning about how to be a good wife to Aikawa from two of Aikawa’s classmates, including the girl who sings the ending song and also has a crush on Aikawa. Poor Taeko Hiramastu. 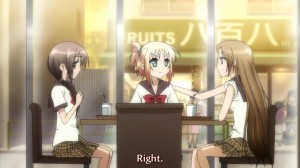 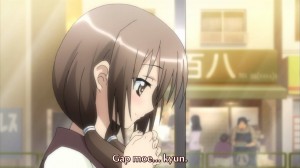 The rest of the episode is mostly about the girls and Ayumu going shopping together, with Haruna attempting to win over Ayumu against the threat of Yuki, culminating in Haruna straight out asking Ayumu to kiss her. 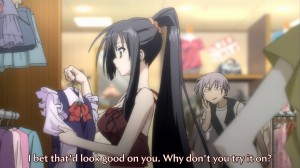 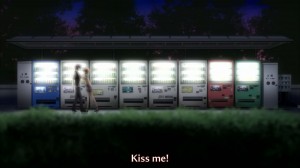 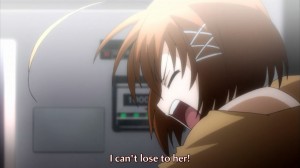 The only real plot development other than that was the revelation of a mysterious man who knows Eucliwood. 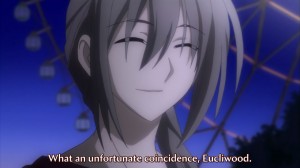 What a fun show. Absolute blast.